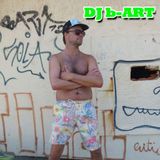 So High (Sloppy Mixes 2)
by Mr. Swift aka DJ b_ART

The Way (Sloppy Mixes 3)
by Mr. Swift aka DJ b_ART