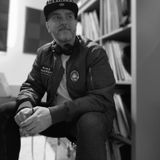 Paul Ager (aka DJ Aygzz) is an old man... "I'll never forget my first rave way back in 1989. I was hooked straight away. It wasn't just the music but the sense of unity, family and camaraderie amongst the ravers who came together from all walks of life to share the vibe and experience".

"During the 1990s, I was fortunate enough to work in the infamous Record Basement and later Vinyl Distribution which cemented my love for the music as it evolved from rave to Jungle Techno, then to Jungle and Drum and Bass. Working there allowed me to rub shoulders with some of the scenes biggest names and to attend seminal nights such as Rage, Speed, AWOL and the Blue Note. A truly awesome time and an absolute privilege to be part of the scene in its heyday."

"It wasn't until the late 90's that I got a gig on Pirate Radio. Spending the next 10 years working on various stations including Creative FM, Too Hot and Logic FM not to mention playing at amazing club nights such as Subfactory in Reading"