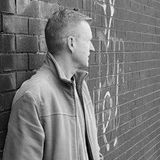 DJ - Deepvibes Radio (www.deepvibes.co.uk)
Currently into Deep House, Disco, Electronica and production, working on favourite tracks to play in DJ sets. My regular monthly show on Deepvibes Radio goes out every 3rd Saturday of the month, 8pm-10pm UK time.
A wide and varied background in music, originally promoting gigs, writing fanzines and releasing flexi-discs by cool bands. Originally got into DJ-ing at the back end of the 80’s and DJ’ed at most North West venues in the 90’s alongside some of the big names of the era. Inspired by many regular nights at Yellow in Manchester, later diversified from playing House into Soul, Funk & Disco music. Resident at Space, Manchester for many years with my Outta Sight night. A return to playing House music has prompted numerous gigs at various clubs and festivals.