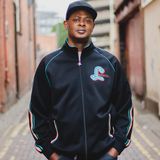 Never miss another
show from D.CRIME

Born and raised in Leicester, in the UK. D.CRIME first came to light back in the early 90’s along side former music partner DJ Yess, together they produced one of the most iconic hip hop tracks to ever come out of England “Time For Action” was released in 1992 on RUFF JUSTICE Records, a label owned by drum and bass DJ/Producer DJ SS who also ran a record shop called 5HQ (Formerly known as Sneakers Records) with his long time school friend Eidris.
DJ’s such as Tim Westwood welcomed this song for his BBC Radio One rap show, as well as Max LX & Dave VJ on KISS FM, DJ 279 on Choice FM and Big Ted and DJ Shortee Blitz.