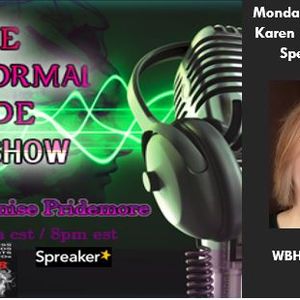 Karen Laven: I am a former newspaper reporter and author of multiple books of fiction and nonfiction, including, Cincinnati Ghosts, Dayton Ghosts, Quit Bugging Me, and, The Surrogate Who Cleaned Up.

I am a public speaker as well, and have given presentations at Victory of Light convention and numerous libraries, schools and facilities. In addition, I am a humorist and actress because I’m nuts. Before riding the stair lift in Med Mart’s commercial (it was exhausting), I appeared in the trailer of the movie, Sugar and Spice, and was a featured extra on set for Drop Dead Gorgeous, Joe Somebody and many indie films. My favorite role to date is playing the mother of a killer in the TruTV show, Psychic Detectives (with ad-libbed lines!).