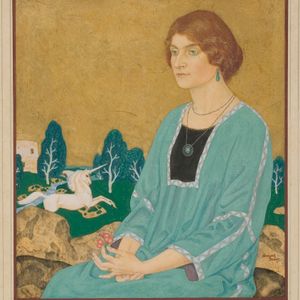 We all know about Maud Gonne, but have you ever heard of George, aka Mrs. WB Yeats? In September 1917, Yeats proposed to 25-year-old Georgie Hyde-Lees and they were married in October of that year. In this programme we learn more about this extraordinary but self-effacing woman who was the catalyst for her husband’s greatest poetry, yet said “thank-you for leaving me out”. Contributors include Professor Margaret Mills Harper, official biographer, Ann Saddlemyer, grand-daughter Caitriona Yeats, Benedictine Monk Mark Patrick Hederman, poet John Montague, Olwen Fouere and Pat Laffan.

A Deirdre Mulrooney production made with the support of BAI Sound and Vision Scheme.