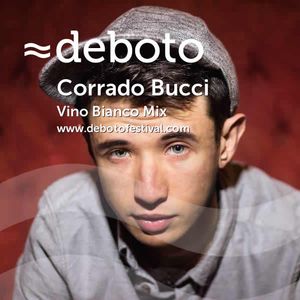 Since Deboto has a love for music, good food and fine wines, we've asked Corrado to come up with a mix after drinking a few glasses (ok a bottle) of white wine. Enjoy

He's young, gifted and Italian. DJ extraordinaire and production whizz Corrado Bucci became the latest star in the Local Talk & Compost Records galaxy. He currently holds the A&R position at Rebirth Records where he also put out the beautiful 'Open Your Eyes' single last year. He previously also released on Defected and has earned respect from people like Gilles Peterson, Rainer Trueby, Jimpster, Lovebirds and Joey Negro to name just a few. The hype is on and Corrado have already started gathering a reputation within the house music community with his symphonic sound. He's fusing his signature sound with the Afro-Latin,Jazz & Funk culture vibe.