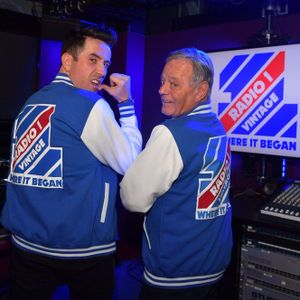 50 years EXACTLY after Tony Blackburn launched the fledgling BBC Radio 1 on 30th September 1967 , he recreated that first show, complete with the original PAMS jingles and running order. The show ran (as it did half a century before) 7am-830 on the Saturday morning. The 2017 version coming live from Wogan House , home of Radio 2 (until 8.30am), having started his air shift at 6am (with Sound of the 60s). From 8.30am, Tony scooted round to New Broadcasting House (home of Radio 1 amongst various stations and TV studios) to co-host with (then) Radio 1 breakfast host Nick Grimshaw. This upload features the recreation of that first show and the double header with Nick Grimshaw, which also featured several other Radio 1 breakfast DJs: Sara Cox, Simon Mayo and Mike Read.