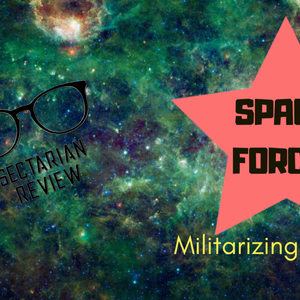 Recently, President Trump spoke about his intention to create a sixth branch of the military, the “Space Force.” In typical Trump fashion, the unveiling was bombastic and rather silly (with Trump even going so far as to casually drop the phrase “separate but equal” into his speech somehow). And in the immediate aftermath of the announcement, a lot of jokes were made on social media (see links below). However, to Danny’s surprise, there were a lot of ostensibly Serious Media People who approved. What did the SMP’s see that we missed? To discuss the idea of militarizing space, Todd Pedlar, Professor of Physics and co-host of the Book of Nature podcast joins Danny on this episode. What are the technical difficulties of doing work in space? What are we fighting over in space in the first place? What are the legal, and more importantly, ethical ramifications of militarizing space? Plus Danny makes a 2001 analogy.