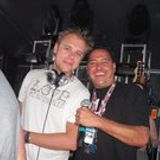 Down under inside
by Ian Hussey

"Music Produces a Kind of Pleasure Which Human Nature Cannot Do Without.." -CONFUCIOUS

I am the host of Ultra Music Festival and have been since day one. The Ultra Music Festival (UMF) is the crown jewel of the annual Miami Music Week music gathering and Spring Break Miami. Located in Downtown Miami, it is the largest festival yearly festival in Miami Downtown and on a worldwide list conducted and published by Pollstar Magazine, Ultra Music Festival Miami was the #8 Highest Grossing Concert worldwide. Miami is the homeland and the birthplace of Ultra. After launching in Miami in 1999, Ultra has now put the big show on the road with Ultra Music Festivals International and shows already in, or scheduled to take place in Brasil, Austrailia, South Korean, Spain, Ibiza,SP, and many more soon to be announced!