Thirty minutes of percussion for discussion 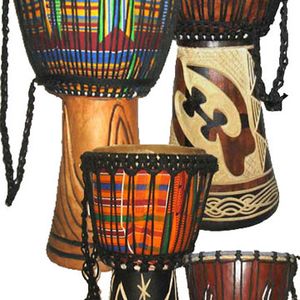 Short mix (30 minutes) in order to hold interest & expose the listener to these sounds while giving a bit of context with a couple of tracks to highlight the different feel this music provides from usual house fare. Tried varying with some classics which are a good reference point. The mix has a strong house feel to it (think old Strictly Rhythm/MAW) but with a much harder edge. The Mis-Teeq track was originally released in 2001 but the basslines and sort of "steppy" cadence are being revitalized now with the resurgence of what is essentially updated speed garage. The percussion tracks also draw heavily on kuduro which is an appropriation/recontextualizing of house music taking place in Africa which draws heavily on those regional tribal rhythms. I couldn't resist placing a small interlude and hearkening back to earlier days of house (1992) & some baile funk, another form of dance/house music from Brazil. Essentially, this stuff has a swing which works the dancefloor in a new way.