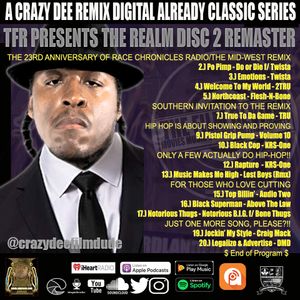 THE 23RD ANNIVERSARY OF RACE CHRONICLES, Do or Die f/ Twist, Twista, 2TRUE, Flesh-N-Bone and more.

During the mid-90's Race Chronicles ruled the airwaves, coming straight from WUJC later WJUC 88.7 FM, John Carroll University Radio. Named Race Chronicles due to the fact the co-hosts Crazy Lord Dee and Red Smok Dawg were Black and White by racial background, but the two came together to bring Cleveland, Ohio, and Suburbs, Remixed Hip Hop, with weekly topics. This is the 23rd Anniversary of the radio show, and the opening of the mix is one of the intros produced by Crazy Dee.

The Realm Disc 2 Remaster is the 2nd disc from the first double remix CD created by Crazy Dee, in the city of Cleveland, Ohio. Dealing with the songs which influenced Cleveland Hip Hop, the complete title is: The Realm: The Gospel of Hip Hop According To Cleveland, Ohio. Disc 2 deals with mid-west hip hop, the southern influence, what makes up hip hop, cutting and scratching, closing with a prediction-- Legalize and Advertise.