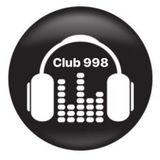 Never miss another
show from Club 998

Ciao, my name is DJ Hans van Vliet and I love Italo disco and Hi-NRG from the 80s. Due the hunt on Pirate Radio Stations on FM by the Dutch Government, l had to stop mixing. Pirating was becoming a crime and I did not want to take any risk. Now, September 2020 after a stop of more then 34 years I decided to pick up mixing Italo disco, Hi-NRG, Euro disco and dance music from the 80s again. The music hasn’t changed in all those years but the mixing tools are extensive and mostly digital. Nowadays mixing is easier and cheaper than in the 80s, but It is still a challenge to make a cool tight mix. In the 80s I had 2 Technics SL1200 mk2 record players for mixing. My best " "friend" is now the Pioneer DDJ-800 DJ set with Recordbox to make the smoothly tight mixes. Arrivederci, DJ Hans van Vliet