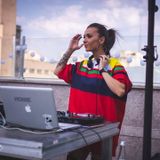 Never miss another
show from Homie

They say that where words fail, music speaks. There are times, though, where there is no causality between the two, as music becomes the only manner of expression. This is the case of Homie, too.
Born in 1990, in Deva, Homie has always felt the poetry of the world rooted deep down within, hence, attending as a young child different acting and painting classes.
Several years later, she moved to the capital, where she succeeded in getting small appearances in TV series, comercials, fashion shows and magazines etc.
Soon, she realised this is a world she does not belong to. She embarked on her next journey, starting by working hard as a wait staff in different clubs and restaurants in Bucharest.
Always in contact with music & her fellow DJs, Homie soon started to spend hours, looking for music that fed her soul.
It all really began in the summer when Stefan Biniak's "Read All About It" was a hit in all the hotspots of Bucharest. As Homie was always expressing herself by helping her DJ frie