The Murder of Fr Jordan 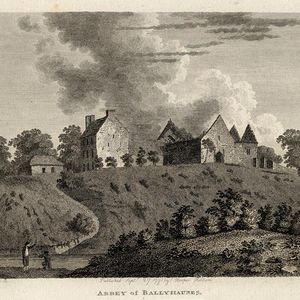 The story of the murder of Fr. Walter Jordan, an Augustinian priest, in 1649 - the middle of the Cromwellian period.

Fr. Walter was the abbot of the Friary in Ballyhaunis, which was suppressed at that time. He was shot dead at Redpark, between Claremorris and Ballyhaunis, and is believed to have been buried in the townland of Holywell.

This programme features a play by Martin Casey, in which the murder of Fr. Jordan is reenacted, followed by several interviews both about the incident and about life in Ireland at that time.

Some of those interviewed include: Micheál Ó Siochrú (Professor of History at TCD), Tadhg O’Hanrahan (Head of Dept. of History, UCD), Fr. Kieran Waldron (archivist of the Archdiocese of Tuam), Tom Waldron (Chair of Claremorris Historical Society) and Michael Kelly, Bekan. The programme also includes harp music by Gráinne Hambly.

I reallly enjoyed this documentary. I was able to listen to it on the way to work yesterday morning in the US! There is a gap in the genealogy of my family in the 1600s. This event, and the environment of the Cromwellian invasion, may help explain it. Thank you for your hard work in producing this documentary. - Jeff Jordan

this is a great production