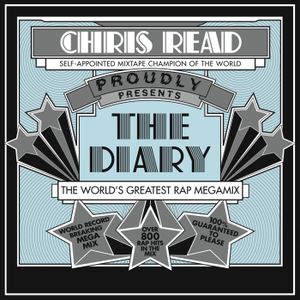 My most popular mixtape to date. Downloaded tens of thousands of times, podcasted and broadcast to a million plus people worldwide. A chronological mix of rap's landmark recordings by order of release from 1979-2007. 801 records in the blend!

“Great! I couldn't take it out of the CD player. I just needed to hear what was coming next!"
(Andy Smith - Portishead)

" A mixtape king no question." (DJ Ollie Teeba - The Herbaliser)

“Megamixing at its finest… Original and essential!” (DJ Plus One – The Scratch Perverts)

This Man is Unbelievable

HOLY SHIT! This is amazing! I was quite pleased that I knew most of these tracks, too! Stellar job, for sure! Thanks and Cheers!

I think it's the BEST thing I have ever heard. Amazing. Well done my man...

Wazup doh! First, i wanna say, u r fckng good man...mthfcker!
So, Please, where r give the set list about "THE DIARY(WORLD's Greatst Rap Megamix)(2008)"??
Peace and glory!

Reminded me why i fell in love with rap.

Nice work Chris, just realised this was your mix - was big back in '07 thanks for posting up here.

Would love to see the track-list, just for the shear volume of work that went into this!