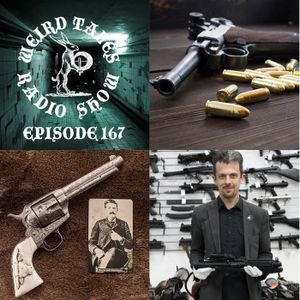 In this week’s Weird Tales Radio Show our guest is one of the UK’s leading experts on guns, ancient and modern: Jonathan Ferguson, the Keeper of Firearms & Artillery at the UK’s National Firearms Centre, which is part of the Royal Armouries museum in Leeds. He is taking us on a whistle stop tour of very dangerous toys for boys. Not only discussing the 27,000 plus pistols, rifles and machine guns in the museum’s collection, including some which would be not be out of place in steampunk movies, but also discussing how they are depicted, accurately or otherwise, in movies, TV series and computer gaming.