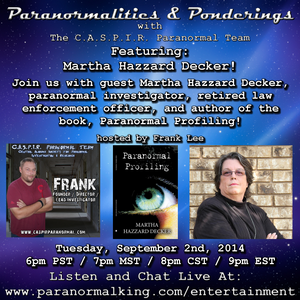 Martha Hazzard Decker has been involved in investigating paranormal actively since 1999. As a child, Decker experienced a number of unexplained occurrences which triggered her long time interest in the unknown. She retired in 2007 from law enforcement as assistant chief of police, negotiator, detective and instructor. She founded East Texas Paranormal (ETP) in 2007. Decker has professional experience as an investigator; criminally and civilly, also as a writer and photographer.

She decided to delve back into writing and photography and her first book, Paranormal Profiling, was recently released. She also writes for Examiner.com under Dallas Paranormal. She has articles in The Realm Paranormal Magazine and on other websites. She did work as a special investigator the past seven years for the State of Texas. Decker is commissioned through the Texas Supreme Court as a process server and serves court documents to individuals and businesses.