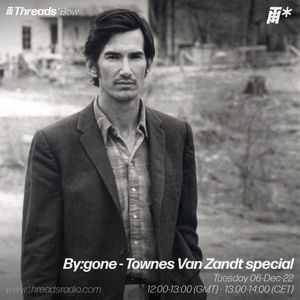 Waitin’ around to die, If I needed you, Pancho and Lefty and Rockport Sunday.

This show was 98th in the global country chart.

For this month's by:gone, we take a look at one of the greatest songwriters to ever have lived: Townes Van Zandt. Through his 52 tragic years, he lived a simple life, mired by addiction and mental health issues, and wrote music that would gain him a small but loyal following of adoring fans, and the respect of the rock, country and folk royalty of the day. It was only after his death did he gain the respect he deserved.

This is an hour of his best music, as well as interview clips from himself and his closest friends.