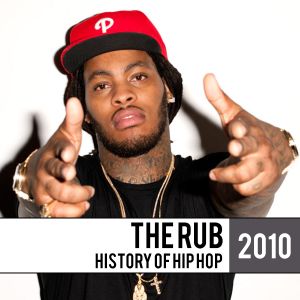 Fans of The Rub's History of Hip Hop series have been asking for new episodes since 2009, and your dreams have finally been fulfilled! We pick up right where we left off, and we'll be dropping another year every month until we're caught up.

2010 was dominated by a few big stars - Young Money's Nicki Minaj, Drake and Lil Wayne were on the radio and in clubs nonstop, along with huge hits by Rick Ross, Wiz Khalifa, and Kanye. Yelawolf, Big K.R.I.T. and J. Cole were the hot up-and-comers. It was Ludacris and Jeezy's last really stellar year, and we also got surprising comeback singles from Dipset, Lloyd Banks, Nas and Big Boi. And 2010 was a great year for producers, including Lex Luger, AraabMuzik, Clams Casino, Stargate and of course Kanye Westand Swizz Beats.

So enjoy this blast from the recent past, and remember you can catch up on all of The Rub History of Hip Hop mixes (1979 - 2010) at http://www.itstherub.com/category/history-of-hip-hop/

Can you make a 90's & 00's hip hop., pop, R&B, clean mix(es) for teachers returning back? As you see with the nationwide teacher shortage, morale is at an all time low going into the new school year. We can use the motivation. Something that could be played in the classroom or on the way to teach the kids in the car. Thank you in advance if you can make this happen!