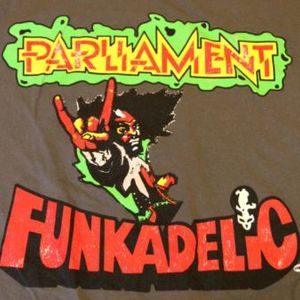 A last minute call to open for the legendary George Clinton & Parliament Funkadelic gave me the opportunity to play some unorthodox tunes along with a few mainstays that the older-than-usual crowd really dug. In the 1970s, Parliament Funkadelic took funk to a cosmic, psychedelic place, so I was happy to break out of my box by dropping some numbers with a rougher edge as well as a couple disco-fied funk nuggets that fit the era. I'd spent the previous ten days traveling the West Coast, finding a good amount of inspiration on both XMSirius' Soultown and Deep Tracks stations, and I assembled a playlist on the flight back from San Francisco. I touched down, hopped in a cab, and sped off to Lower Manhattan, arriving to warm up the crowd for two hours in preparation for the landing of the mothaship.

I really enjoyed this.