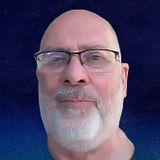 REFLECTIONS (THE GOOD, THE BAD & THE UGLY) OF MY LIFE feat Rabbitt, Freedoms Children, Radio Rats
by BRIAN CURRIN MUSIC