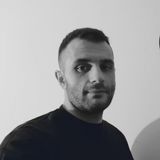 Never miss another
show from Branos

Branimir Šolaja aka Branos
Dj/Producer
Born in Zagreb in 1985.
Represent of Techno music. His inspiration and passion for electronic music is discovered In 2000, following various techno events and Dj's.
In 2007 purchases his first player,mixer, and began playing at clubs: ( Radio Lora show (Switzerland), ECO Festival (Slovenia), Club No.1, Jadran Film, One4one, Boogaloo club, Posh, Gjuro 2 ... etc) in 2013 begins his residency in the cult club No .1 .In 2017 he began to work his own production, in the beginning of 2018 he published his first track for Infinitech records..
Known for its long sets, which are imbeded with the Spanish and African percussion and traibalisam can last up to 10 hours.His upbeat and joyful music moves the young as well as the old straight to the dance floor and he can be counted on to give his best in each performance.
https://soundcloud.com/branimir-branos-solaja