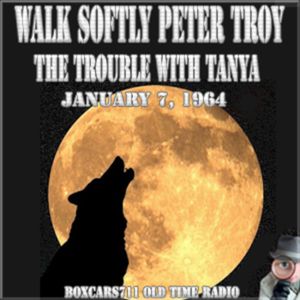 Walk Softly Peter Troy, Detective Drama, Aired on Springbok Radio from 10 December 1963 to 21 February 1964. This series was produced in the Durban Studios of Herrick Merril Productions. It starred Tom Meehan, John Simpson, and Merle Wayne. It was sponsored by Irving & Johnson, who also sponsored the "Gunsmoke" series which "Walk Softly, Peter Troy" replaced. A sequel to this series was heard on the English Radio Service from 19 May 1964 to 28 November 1964. This was the first series on the English Service that came from an independent production house, not produced by the SABC. There was an Australian version of this radio series produced prior to the South African productions.