Making The Most Of A Monday 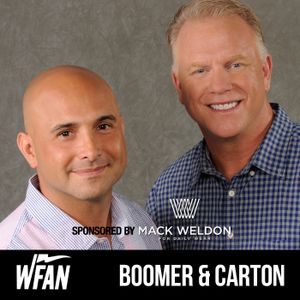 Making The Most Of A Mondayby Boomer & Carton

After spending the majority of his weekend licking his wounds after the Rangers had their season ended abruptly, Boomer took his seat along side he Islanders jersey wearing (pictured) radio partner/BFF Monday morning prepared to discuss the latest developments in the world of New York sports.&nbsp;The Rangers of course made the cut, as did the Islanders - who actually advanced to the second round thanks to an OT winner, courtesy of Jonathan Tavares.&nbsp;We also heard about the Redskins inking Josh Norman to a deal, the Jets tried to trade-up to #1 (what's that say about Fitzpatrick?), Steph Curry suffers another injury to a lower-extremity, the Mets' road trip proved to be a good one, the Yanks win the series but lose a game (and A-Rod).&nbsp;And there you have it.&nbsp;It's a Monday, so make the most of it.