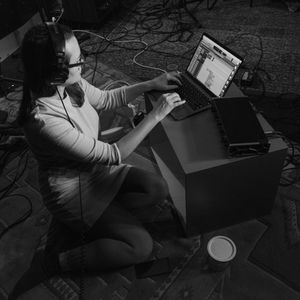 Christina Vantzou is a Missouri native of Greek descent who resides in Brussels, Belgium. A composer
& experimental filmmaker, she works with space, sound, and image on a level of curiosity and refinement. Over the course of fifteen years she has built an audiovisual language very much her own. Vantzou has composed and released four albums of ambient-classical music on Kranky and has developed a form of graphic musical notation influenced by abstract minimalists. Her many collaborations have included performing with Mark Linkous (Sparklehorse), co-founding The Dead Texan, creating abstract films for renowned musical artists, and performing with ensembles across 4 continents.