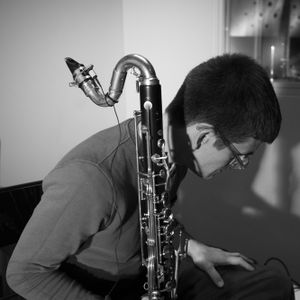 This show was 56th in the global experimental chart.

Ben Bertrand is a Brussels-based bass clarinetist who evolved in the Belgian contemporary/classical scene. He imagined a device that enables him to transform thenatural sound of his instrument into electronic ones, allowing him to create loops and orchestrations for solo performance. For his first EP, Era/Area (Off Records, February
2017), he arranged a collection of themes drawn from a wide range of places and ages– from a pygmy song to an ancient crusaders' melody dedicated to the lost Jerusalem passing by a Gavin Bryars's piece – merging them into a subtle, fascinating and hypnotic musical object. His album will come out in 2018. We had an interview with him, he played a session and selected some records by Colleen and Jessica Moss.