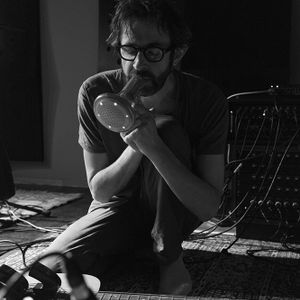 This show was 95th in the global experimental chart.

We are very proud to welcome Sylvain Chauveau in our live studio. Sylvain has made solo records on labels such as FatCat, Type, Les Disques du Soleil et de l'Acier, and Brocoli: very minimal compositions for acoustic instruments, electronics and vocals. His music has been played in John Peel’s show on the BBC and was reviewed in The Wire, Pitchfork, Mojo, Les Inrocks, Libération, The Washington Post and many others. He co-runs with Florent Garnier the label I Will Play This Song Once Again Records where musicians have to re-record their songs for each buyer: www.iwillplaythissongonceagainrecords.co.
He has composed a piece titled You Will Leave No Mark on the Winter Snow whose duration is seven years, with extremely long silences inside. One can listen to the streaming here: www.7yearsofsilence.com.
He makes soundtracks for long feature films and dance shows.