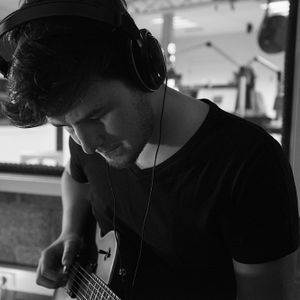 Illuminine, Sofar and Interview with.

In the silence of the night, Kevin Imbrechts awoke as Illuminine. In his bedroom, accompanied by a guitar and a handful of style effects pedals. For years, the Leuven
native had secretly been tinkering with soundscapes and more elaborate guitar tracks, but now, ‘Illuminine’, his ‘#1’ debut is ready to face daylight for the first time.Illuminine breathes Iceland, and the self-titled album could be related to Nils Frahm, Ólafur Arnalds or A Winged Victory For The Sullen. But Imbrechts was not necessarily influenced by them. “Through the years, I’ve mainly been influenced by Buckhethead. ’Electric Tears’ was my very first experience with slow, instrumental guitar music.” We had them live as a quartet in our live studio.