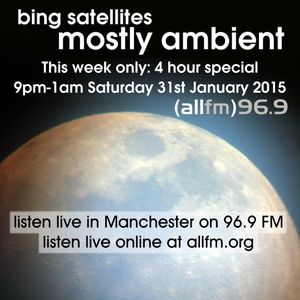 A special 4 hour edition of Mostly Ambient, originally broadcast live on ALL FM 96.9 in Manchester from 9pm to 1am on Saturday 31st January 2015.

This week's A to Z of Ambient, brought to you by the letter O and features music from The Orb, Ozric Tentacles and Manchester's very own onspiderpark.

Next week, the show goes back to its regular 2hour slot, starting at 11pm.