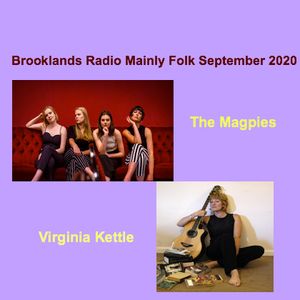 After a summer break Mainly Folk returns with a reinvigorating tonic of new Folk and Americana music.
When the music venues open again make sure you try and see The Magpies. They are four very talented multi instrumentalists and have produced one of the standout albums of 2020, “Tidings”. The collective noun for magpies is 'tidings'; we talk to Holly Brandon about how these Magpies got together and produced such a great debut album.
Regular listeners will know that we are great fans of Merry Hell & really pleased that now Virginia Kettle has released a new solo album. Her songs always have depth and this new album is no exception. Aided by some of Merry Hell, her vocals and the production do the songs full justice and Virginia gives a great insight into how “There's No Place Like Tomorrow” was created.
We finish with Hector Gilchrist's 'The Story and the Song' which this month is all about the Angus poets, of which one wrote the featured song, 'Norland Wind'.
Presenter: Bev Harris