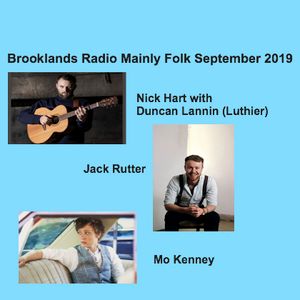 We have a great clutch of Sidmouth souvenirs to share with you.
First off we have a double feature with rising star Nick Hart and his luthier Duncan Lannin. Duncan had a stall at the Sidmouth Festival and at least one or two people took home one of his fine handmade instruments. You can hear one of them in action when Nick talks about his latest album 'Nine English Folk Songs'.
Another musician who was great at Sidmouth was Jack Rutter. He is about to embark on an autumn tour to promote his new CD 'Gold of Scar & Shale'. It was great chatting to him, including some fine guitar playing with seagulls in the background.
By way of contrast Jim Guynan's Roots Canal features an interview with the very talented Mo Kenney.
Hear tracks by Mo, including her latest single 'Ahead Of Myself' with informative chat between her and Jim.
We also have Hector Gilchrist's 'The Song and the Story' + the gig guide + the latest Folk & Americana releases.
Presenter: Bev Harris. Producer:Hugh Evans