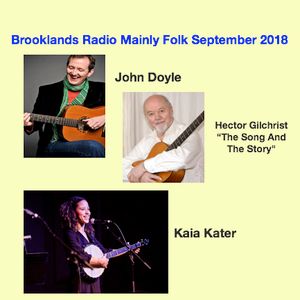 John Doyle is one of our favourite modern folk performers and he played some great music at this year's Sidmouth Folk week. We caught up with him after a terrific set on the Ham stage and he treated us to a couple of songs before they are recorded.
Our friend traditional Scots singer Hector Gilchrist and i both enjoyed Fairport Convention's first time at the festival which included their version of 'Sir Patrick Spens. We agreed that the ill fated Sir Patrick would be a very suitable subject for a proposed new Mainly Folk feature by Hector, 'The Song and the Story'. Tune in and find out more about the fact and fiction behind this much covered traditional song.
Kaia Kater has already been singled out by Rolling Stone magazine as a star in the making. I think you will too when you hear our special on her in the second hour.
Finally our producer Jim Guynan puts the spotlight on roots based performers who deserve a lot more attention.
Presented by Bev Harris. Produced by Jim Guynan.