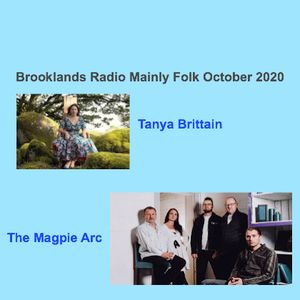 October's Mainly Folk has some great new music to brighten up the advent of autumn.
Tanya Brittain hails from South Yorkshire but having settled in Cornwall is best known for making some seminal albums with Sam Kelly as 'The Changing Room'. Now Tanya has released a solo album which has a much more personal narrative. In the first hour of the show we talk to Tanya about 'Hireth' which features great songs drawn from her personal experiences.
In the 2nd hour the focus is on the new folk supergroup The Magpie Arc. Its members include Nancy Kerr, Martin Simpson and Adam Holmes. All members of the band are playing beyond their regular styles and together they are creating something different and really special. Nancy tells us how this is achieved in their new EP1, the first part of their debut album.
As usual we have a fine selection of new folk & Americana releases. We finish with Hector Gilchrist's 'The Song and the Story' which being October is on the Celtic traditions of Halloween.