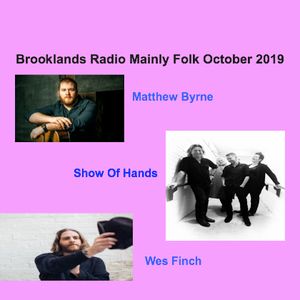 Chris While, Julie Matthews and Show Of Hands.

In a Mainly Folk first we did a triple interview at The Sidmouth Festival with Newfoundland's Matthew Byrne and fellow broadcasters Peter Grogan from Dublin City FM and Sam Hindley from Sheffield Live. He also played live for us, a rare treat you can hear in the second hour.
Sidmouth patrons 'Show of Hands' have a new album and a new member. We talk to percussionist Cormac Byrne about the making of 'Battlefield Dance Floor' and we play tracks from the album that showcase the talents of all four members.
As usual we have new folk and Americana releases plus Hector Gilchrist's 'The Song and the Story' which this month tells the story of 'The Lavrock' song.
Sadly, last but not least, we have the ultimate episode of the current series of 'Roots Canal'. Jim Guynan goes out with a bang with his guest Wes Finch of whom I'm sure you will be hearing a lot more of in the not too distant future.
Presented by Bev Harris
Produced by Hugh Evans
Roots Canal section by Jim Guynan