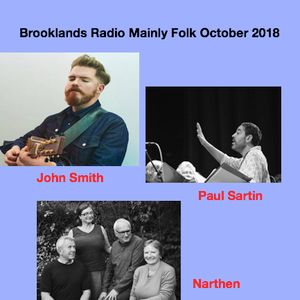 John Smith has a fantastic new CD called "Hummingbird". It has all the ingredients of a classic album. John tells us about it's making and his upcoming gig at The Ram Club, which is part of an extensive tour to support it's release.
Faustus' Paul Sartin and Saul Rose with Matthew Crampton put on some great choral performances of "Living By The Sea" at Sidmouth Folk Week. Paul's next plans include a project on the Lancashire cotton mills with Faustus. You can hear an exclusive preview track from this as part of our conversation with Paul.
Narthen made their Sidmouth debut this year. Barry Coope, Lester Simpson, Jo Freya & Fi Fraser make a wonderful sound. You can judge for yourself when we play their music and Jo fills in the details of all things Narthen.
Lastly we have 2 extra goodies. Hector Gilchrist's "The Song And The Story" has a topical Halloween theme and producer Jim Guynan's " Roots Canal" has 3 great new tracks..
Presented by Bev Harris. Produced by Jim Guynan.