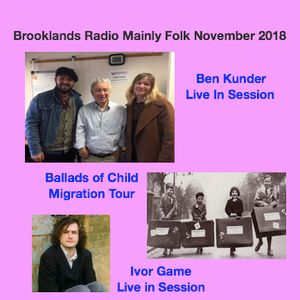 We have two great sessions of live music this month but first off we find out more about a very important project which has received the support of many stars of the current folk scene.
This November leading folk musicians take to the road to perform live the album "The Ballads Of Child Migration". You can find out a lot more when we talk to John Leonard the man behind this major project.
We finish the first hour with Hector Gilchrist's "The Song And The Story". This month Hector tells the real story behind the traditional ballad " The Massacre of Glencoe" .
Canada's Ben Kunder assisted by Carleigh Atkins recorded a great live session for us, including tracks from his latest album "Better Human". We loved the beautiful harmonies and stripped down versions of his new songs !
Finally, Jim Guynan's regular Roots Canal feature is rather special as he was joined by local player Ivor Game playing live some great original compositions.