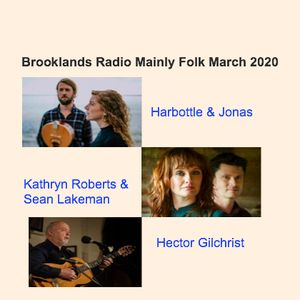 This month's Mainly Folk features two very talented couples.
In the first hour we are in the company of Harbottle and Jonas. They play a variety of instruments and hearing them live it is hard to believe there are only two them as they produce such a rich full sound.
Folk Award Winners Kathryn Roberts and Sean Lakeman celebrate 25 years of making music together in their new album "On Reflection" and are currently on tour including locally to Brooklands at Landmark Arts, Teddington on March 14th. In the second hour we catch up with them to find out more.
Last but by no means least we celebrate Hector Gilchrist's 80th birthday in a special "The Song and The Story".
Hector's birthday will be marked by a special gig at The Ram Club, Thames Ditton hosted by Hector and some of the musicians he has worked with over the years.
As usual we have the gig guide and our Americana section which this month highlights young bluegrass artist.

Produced and presented by Bev Harris