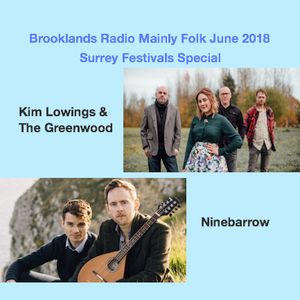 Last month saw 2 excellent festivals local to Brooklands Radio.
The Walton Folk Festival is a new venture and in the first hour of the show you can hear our conversation with Ed Butcher, one of the organisers, who told us how it came about and their plans for the future.
The festival is based at the Riverhouse Arts Centre and one of the stand out acts was Kim Lowings and the Greenwood. We caught up with Kim straight after her performance and found out more about her and the band and we also play some great tracks from their recent CDs.
Guildford's Trinity Folk Festival gave us a chance at last to see the West country duo,Ninebarrow. You can hear how good they are when we play tracks from their latest album, "The Waters And The Wild" Jon and Jay tell us what goes into making a successful folk duo.
Besides all of the above we have our Americana section and the gig guide plus a special new feature by our producer Jim Guynan.
Presented by Bev Harris. Produced by Jim Guynan.