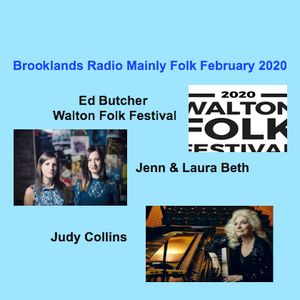 The first hour of February's Mainly Folk looks forward to one of the outstanding events of the local and national Folk year.
Riverhouse Barn in Walton On Thames is holding the third Walton Folk Festival in May. Its bill is even more ambitious than the last two years. We talk to Ed Butcher about 2020's stellar line up and then give another chance to hear an interview we did with Jenn and Laura-Beth at the 2017 Sidmouth Folk Festival as they are just one of the great acts that will be playing the Walton Folk Festival which will be held the 9th and 10th of May.
In the second hour we have a selection of the latest Americana tracks and then we talk to a real living legend, Judy Collins. She was recently touring over here and her latest album is high in the American Bluegrass charts and you will hear why she is still rated as one of the world's finest singers. All of this plus the gig guide makes for a lively February Mainly Folk.
Presented and produced by Bev Harris