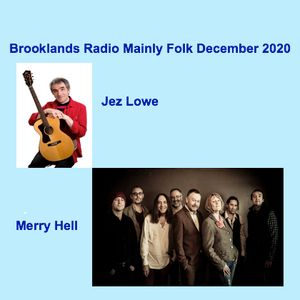 Jez Lowe is a multi-instrumentalist & he takes full advantage of this in his new album “Crazy Pagan “. Normally he would work in the studio with his band The Bad Pennies. This time most of the multi tracked instrumentation and vocals are by Jez on his own. He tells us about the process of making this album of original songs which we think is his best to date.
Merry Hell's ace in the hole is John Kettle's production wizardry. In the second hour we talk to John and Virginia Kettle about the brilliant new Merry Hell album “Emergency Lullabies”. As you would expect their latest deals with many of the issues we now face but in a way that is nothing short of inspirational. Fantastic musicianship & a great sense of humour are Merry Hell's trademark and we hope you enjoy as much as we did listening to their music and John & Virginia telling us how the band made it, including 200 members of their Social Isolation Choir.
Finally we have Hector Gilchrist's on "The Song &The Story".