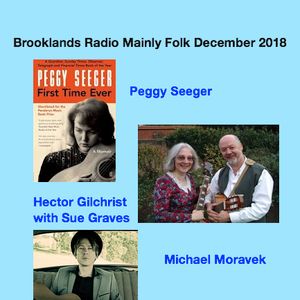 Expect some seasonal treats when you tune into December's Mainly Folk.
Many of you have enjoyed Hector Gilchrist's 'The Song and the Story' part of the show in the last few months.
We thought it's about time we did him full justice so in the first hour we feature a live session with Hector accompanied by another fine singer who Hector has worked with in the past, Sue Graves.
In the second hour after our Americana section we broadcast a very special interview with legendary performer Peggy Seeger. We recorded it at this year's Sidmouth Folk Week when she released the paperback version of her award nominated autobiography 'First Time Ever'.
We round off the show with another excellent Jim Guynan's "Roots Canal".
Jim's guest is Michael Moravek, an original singer songwriter from Germany whose music has an Americana flavour.
As usual we have our local gig guide plus some great seasonal tracks. Yule be glad you tuned in !
Presented by Bev Harris. Produced by Jim Guynan.