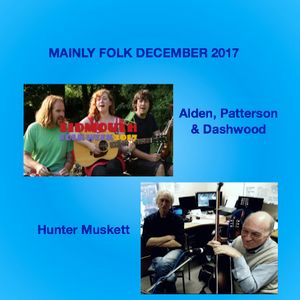 This month we have two great features plus some rather fine seasonal tracks in the latest releases.
Sidmouth Folk Week is renowned for showcasing new, emerging talent and this year was no exception. I'm always impressed by the high standard of musicianship and Alden, Patterson and Dashwood are one of the most talented and versatile of the current crop. Join us in the first hour of the show when we talk about their careers so far and play tracks from their debut album, "Call Me Home", which amply illustrate how good they are.
The second hour of the show has a special seasonal treat. The legendary folk rock band Hunter Muskett released an excellent new album this year ("Unafraid And Sober" ). We thought it would be great if they could play some of them live and have managed to get two of them into the studio. Roger Treveitt and Terry Hiscock perform as a duo with some great songs and fine playing.
Presented by: Bev Harris Producer: Jim Guynan