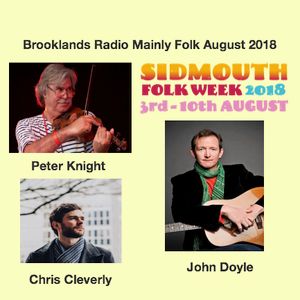 August's show includes two interview features with artists at this week's Sidmouth festival.
Peter Knight is an exceptionally gifted violinist whose playing has graced a wealth of music over the years, including Steeleye Span and his own band, Gigspanner. Get a taste of what to expect and hear how his music has developed in the first hour of the show.
Next on the bill is young folk artist Chris Cleverly. Chris isn't at Sidmouth but recently appeared at a local folk club, The Anchor in Byfleet. He managed to find some time to chat to us and even got to play us an instrumental!
John Doyle has been a "go to" guitarist for many year and one of the standout performers at Sidmouth Folk Week. We managed to talk to him while he was on a sell out Swedish tour.
We still manage to get in a smattering of Americana plus our Producer Jim Guynans' Four Folk Finds showing off the talents of four independent artists.