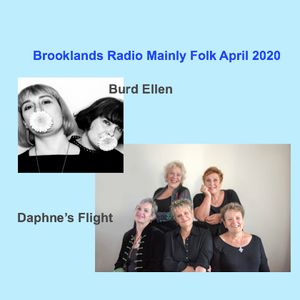 In this month's Mainly Folk we feature a range of new releases and two special interview features.
In the first hour we are putting out an interview we did with Burd Ellen at last year's Sidmouth Festival. Debbie Armour and Gayle Brogan take an innovative approach to Folk Music which is powerful and compelling.
Then fresh from his 80th Birthday concert at The Ram Folk Club. Hector Gilchrist returns with "The Song and the Story" while observing the distancing rules!
In the second hour after our selection of the latest Americana selection we talk to Chris While and Julie Matthews in their role as two fifths of Daphne's Flight. They were about to go on tour to support the release of this new album which celebrates 25 years of performing with Melanie Harrold, Helen Watson and Christine Collister. The tour is postponed but the album is still being released. We play tracks from it and Chris and Julie give us the story behind it.