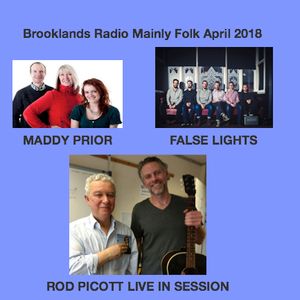 Steeleye Span's's lead singer Maddy Prior is currently on tour and we get a chance to see her in a trio setting with Hannah James and Giles Lewin at the Landmark Arts Centre in Teddington on April 20th.
They have just released a lovely new album called "Shortwinger" and in the first part of the show we talk to Maddy and play tracks from the new CD.
Fairport Convention's 1969 "Liege And Lief" set the benchmark for the seminal folk rock record and not many albums since have come up to this high. Well, in my humble opinion, Sam Carter and Jim Moray's band False Lights have managed it with their new release, "Harmonograph". We catch up with Sam who shares insights into this brilliantt new album.
In the 2nd hour we have a live session from Nashville's Rod Picott. In the last show we played a track from his new double CD "Out Past The Wires" and I said "Wouldn't it be great if we could get Rod to play live in the studio ". Well, we managed it !
Presenter: Bev Harris Producer: Jim Guynan