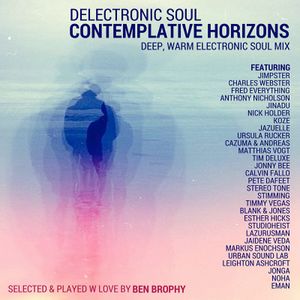 This show was 15th in the global deephouse chart.

I’d call it ‘deep house’ (which it is) but the term’s been so bastardised the past few years with a lot of the stuff being passed off in it’s name doing both a massive disservice to real deep house & to many of those who’ve been into the music & sound for longer than when it became a passing bandwagon to hop on until being told to move on & like the next mass marketed ‘big thing’!

Hey Ben. Just letting you know... Spent the day lay in a hammock with the Autum sunshine beating down on me this afternoon totally Blissed out by your set. Thank you maybe see you via jerry F one day xx

Hammock, sun on face, music....sounds pretty perfect Dee. Glad you're feeling the music....what it's all about ;) x Yes see you sometime. Jerry's spinning at my birthday party on Sunday x

Download link for offline listening / keeps - http://bit.ly/DelectronicSoulMixDownload - message me if want WAV or if it expires x

Beautiful to know you're feeling it. Enjoy the music RR x

That's what I love about sharing online. Someone, somewhere around the world can enjoy something you've created & felt at a specific moment in time. Take care Solo x

Thanks Stijn - like yourself, just sharing some of the many sounds with a deeper, soul tinged edge x

Thanks Simon....as ever, just sharing a small selection of sounds I enjoy & feel. Glad you enjoyed it.

Lovely stuff. my mate Dylan speaks highly of you, :)

Thanks Neil. Haven't seen Dylan for a while but he's a top guy and was always a treat to receive one of his mix CD's through the post.