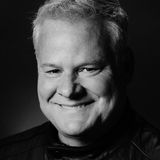 There are very few DJs that stand out in the world today. BB Hayes is without a doubt one of them. BB’s infectious personality combined with his flawless mixing style and song presentation makes him easy to spot. His music reflects his emotional connection to the audience. He takes you on a musical journey, like he’s telling a story. The music builds as the story unfolds to a climax, and so does his energy. BB excites the crowd dancing, jumping up and down, and waving a white towel over his head like a crazy man, sending the crowd into a screaming whistling frenzy! His passion for music and entertainment puts him a cut above the rest. BB said, "It's the connection I feel with the audience that drives me." If creating and producing original songs, remixes, video game soundtracks and jingles wasn't enough, he is also very active in the film business acting in television and radio commercials, and hosting his own talk show. He does all this while supporting his family.