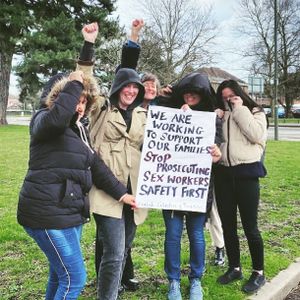 The first part of the first show of the new decade.
07:17 Efa Supertramp, the folk-punk singer from Wales who also fronts rave-punk band Killdren who got banned from Glastonbury for their song Kill Tory Scum (Before They Kill You) joins us in the studio to play banging tunes and chat with Steph about hit lists management. (On-going banter)
13:00 Spanking new jingles from Gulabi, a sex workers ally and feminist and anti-caste activist from Karnataka, who conspired with Parsley to subvert her classical musical training for Ava’s streaming pleasure.
17:57 Laura Watson fresh from the court reports on how two migrant sex workers and the English Collective of Prostitutes fought against charges the women permitted each other to use a flat to work (S35 of the Sexual Offences Act 1956) on Wednesday 8th January.
39:20 News from the many worlds of sex work plucked from cyberspace by the Naked Anthropologist Laura Agustín, and read by Gia from a sunnier place.