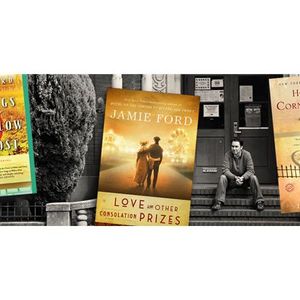 Jamie Ford is the New York Times bestselling author of HOTEL ON THE CORNER OF BITTER AND SWEET, which won the Asian/Pacific American Award for Literature. He is also the author of SONGS OF WILLOW FROST. His newest novel, LOVE AND OTHER CONSOLATION PRIZES, was conceived on a true event which took place during the 1909 World's Fair in Seattle. The novel is listed as one of Library Journal's Best Books of 2017. Ford grew up in Seattle and he now lives in Montana with his wife and children. http://www.jamieford.com/about-jamie/

Radio host and author Laura Moe spent most of her working life as a librarian and English teacher in central and Southeastern Ohio, but has recently moved to Seattle where she writes full-time. Moe is the author of YA novels PARALLEL LINES (Fat Cats, 2015) and BREAKFAST WITH NERUDA (Merit Press, 2016, ) named by the New York Public Library as one the Best Books for Teens in 2016 and a Top Pick for VOYA. She is owned by a spoiled white cat and is working on a seq